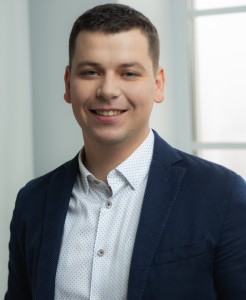 Position: Head of Television Business, General Producer of 1+1 channel, Board member of 1+1 media

Maksym Kryvytskyi held the post of General Producer of 2 + 2 TV channel since January 2017.

On the 20th of August 2019 he became the head of the business unit “TV Business” amid the 1+1 media group. Since the 19th of August she has been a member of the 1+1 Media Board.

Maksym has two higher education degrees. In 2006, he graduated from the Electronics Department of The National Technical University of Ukraine “Kyiv Polytechnic Institute” with a Specialist’s degree in Audio, Video and Film Technology. In 2008, he obtained his Master’s in Finance at the Kyiv National Economics University named after Vadym Hetman.
He started his career on television in 2000 as an assistant director. Then, he trained at AGB Company, the first company in Ukraine to deal with television measurements, and became an analyst.
From 2001 till 2012, he was employed at K1 TV channel where he grew to become first a head of marketing research department, then a programming director, and finally a deputy CEO of K1 TV channel.

In 2012, he was invited to join MTV Russia TV channel as its Programming Director. In 2013, he took a direct participation in launching Friday TV channel. He proposed programming and content policy that has become quite successful there. Over three years, the channel has gained its popularity, won a number of awards, and significantly increased its share. In 2015, the channel was recognized as the year’s brand according to Forbes magazine. The channel’s successful projects Oryol I Reshka and Revizorro were bestowed with the highest awards at TEFI Awards presented by the Russian Academy of Television.