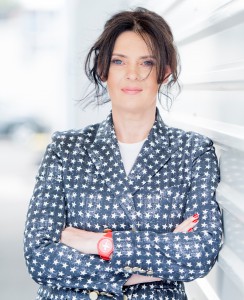 Olena Martynova has been holding the position of the Strategic Marketing Director at 1+1 Media since January 2014.

Olena has 20 years of experience in the media business. She started her career as a reporter in television economic news, and then she held senior positions in media companies.

Olena started her journalistic career in 1995 as a reporter at the independent production studio Dilovi Novyny (Business News) in Kharkiv. A year later she became a program editor, and then a co-owner.

In 1999, she joined the corporate centre of the UMH Group in Kyiv where she was responsible for marketing and PR. Olena was in charge for development of new positioning and promotion of Telenedelya brand. She was also responsible for launch of a number of the Group’s magazines namely Fokus (Focus), Korrespondent (Correspondent), Forbes, Dengi (Money), as well as collections of books Persha Svitova Kolektsiya (First World Collection) and Velyki Khudozhnyky (Greatest Artists) for Komsomolska Pravda.

During Olena’s work for UMH Group, the company improved its financial performance by becoming the most profitable media group in Ukraine and the country’s second by the volume of money turnover.